This event Zeraora was distributed to Pokémon Ultra Sun and Ultra Moon players via serial codes given away at various stores in Europe (UK, ES: GAME, IT/GERMANY: Gamestop, and FRANCE: Micromania) and US (Gamestop) to commemorate the release of Pokémon Trading Card Game (TCG) Lost Thunder Elite Trainer Box. The codes to redeem this Pokémon were valid from October 1 to November 15, 2018 (Europe) and October 19 to November 9, 2018 (Americas).

The English and German version have Fula City as OT, while the French version only has Fula as OT. Italian version has Eolipoli as OT while the OT for the Spanish distribution is Mistral.

The Fula City OT version of this event Pokémon was re-distributed by EB Games in 2019 in Australia via serial code from May 3 to 26, 2019.

What makes this event Zeraora special?
Like most Mythical Pokémon, Zeraora can only be obtained through event distributions such as this. It cannot be bred or caught in the wild. This is the second time Zeraora is publicly released for legal use in the game, after the Japanese event.

Finally a normal one

I was a little bummed that only the shiny Zeraora was given out in recent times. Especially since shiny mythical is usually, for me at least, just box filler since I want them untouched. So this gave me the perfect opportunity to gain a normal Zeraora from an even I JUST missed due to personal reasons. Fast delivery, and the pokemon is literally flawless.

Very happy with the result. Transferred up all the way to my switch with no problems or hiccups very nice people and helpful. 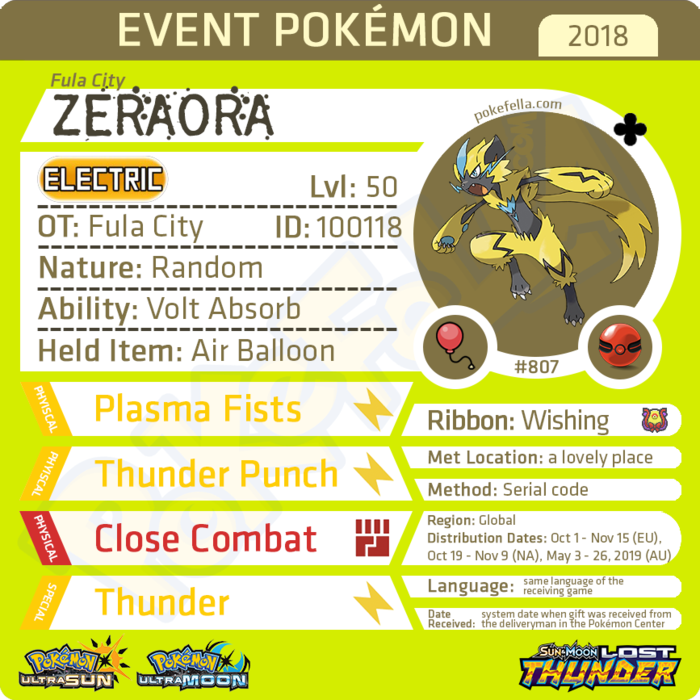 Thanks for giving me the chance to own this pokemon. I have been hunting for zeraora since i saw it can come to sw/sh. Fast Trade and will come back for more

I missed out on the opportunity to get Zeraora in my town. Super happy to finally get a new and missing mythical.