This mythical Pokémon Mew can be obtained by players of Pokémon Let's Go, Pikachu! and Eevee!, and Pokémon Sword and Shield as a gift when they purchased the Poké Ball Plus. To redeem this gift, players need to connect to the Internet via Mystery Gift. If the Mew inside the Poké Ball Plus hasn't been transferred to a Let's Go game yet, it can be received in the Sword or Shield version.

There is no known end date of this bundling yet.

What makes this gift Mew special?
This is the only way a Mew can be obtained in Pokémon Let's Go, Pikachu! and Eevee! game versions, as this mythical Pokémon cannot be caught in the wild. 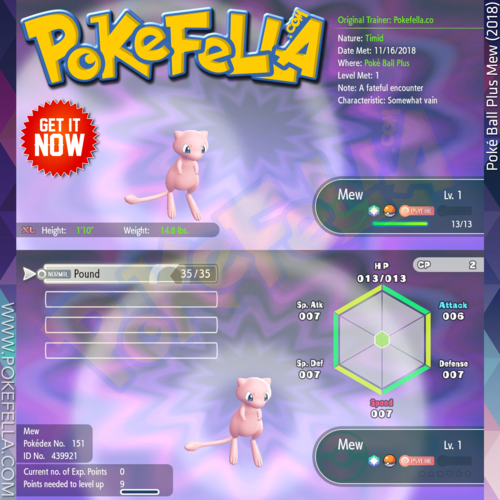 Delivery was easy and flawless and the Mew was exactly as advertised. Would recommend. I hadn't heard of Pokefella before, and stumbled upon the site during a google search. As with most people, I'd guess, I was reluctant at first. However, I jumped in due to me not wanting to spend a lot of money getting Mew from Poke Ball Plus risking getting an empty PBP as many have. I ordered this one, and after some initial confusion (mostly due to me not understanding that there existed two versions of this, depending on if you import it into LGPE or SwSh) I sent a message to tell them that something was wrong with the Mew. Even though we cleared the confusion and it was apparent this was my fault since I explicitly told them to make the wrong version, they put me next in line and swapped my Mew with a correct one. It is now perfect and everything, from initial delivery to redelivery, even though they delivered correctly, was done in matter of minutes.

Fantastically quick and very polite lets go pokeball remote is not worth the cost but this service is worth every penny!